In Northwest New Mexico, the Farmington Public Schools Transportation Department is responsible for busing hundreds of students in a large area that includes a significant area of Navajo reservation lands. The district has 68 bus routes covering large geographical areas because students’ homes are often spread out. Some routes cover more than 100 miles daily. Overall, Farmington Public School busses average about 6000 miles a day total and over a million miles annually. 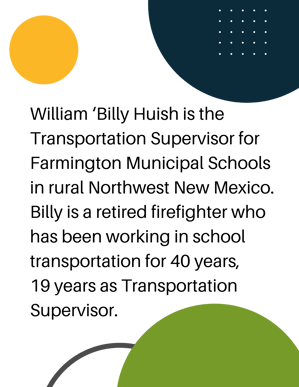 When William ‘Billy’ Huish, the Transportation Supervisor for the Farmington Municipal Schools, came across the App-Garden vendor booth at a conference, he started up a conversation with the App-Garden staff about their bus routing software, Travel Tracker Routing. Billy wasn’t looking for a bus routing software solution at the time because, as he put it, “It took convincing to get me to spend money on something we have been doing manually for years.” However, Billy felt a connection with the App-Garden staff because they listened, they cared, and they weren’t pushy. After returning from the conference, Billy shared information about App-Garden’s Travel Tracker Routing software with the district’s technology staff. The technology staff felt like the software was what they needed to replace their older system, which included old software and typing bus routes up as Microsoft Word documents. While reviewing the Travel Tracker Routing software, Billy and the technology staff appreciated that there were no hidden fees or extra costs with App-Garden, which they had seen with other software providers.

After purchasing and implementing the software, the district appreciated how it often made a highly complex task quicker and easier to complete. The Routing software made creating and changing routes simple. It allows for alternate routes without impacting the existing, already established routes. And the pin drop option was especially helpful for a number of reasons. Homes on the Navajo Reservation are often very spread out, and they may not have mailing addresses because they collect their mail from the closest store with mailing services. Using the pin drop option to identify homes without street addresses made creating routes more efficient and helped eliminate overlaps between routes.

At the start of the Coronavirus pandemic, schools shut down. The Transportation Department left the business of transporting kids to schools and entered the business of delivering meals to kids. The district believed they would have about 20 food delivery routes. Using the “sandbox” side of App-Garden’s Travel Tracker Routing software and the pin drop option, the district was able to optimize food delivery, reducing the number of food delivery routes from the initial 20 down to 13 routes.

The most impressive part for Billy is the App-Garden staff, who quickly reply when he has a question and are quick to implement suggestions for improvement. They listen and do everything they can to help. Billy tells the App-Garden staff that they are part of the Farmington Municipal Schools busing family. He also shared with neighboring districts who have students on the Navajo reservation about the App-Garden Travel Tracker Routing software. Those districts purchased and implemented the Travel Tracker Routing software as well.